So we made it to Staten Island relatively unscathed. And have spent the last 24 hours moving furniture and dealing with all the regular moving stuff. Rocky also made it -- although possibly a bit more traumatized. 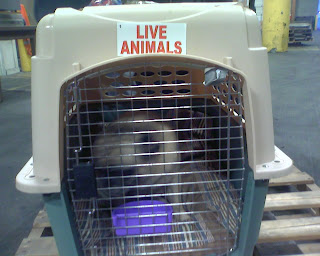 Here he is in his crate, just before they carted him away on a forklift. 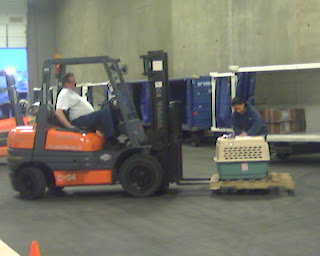 They taped a bag of food and a bone to the top of the crate, but wouldn't let me send him with his stuffed bear, which I'm sure he missed like crazy. I really tried to work the stuffed bear in there, but no dice. I felt very guilty, but they people who worked there let me walk him and then stay with him until they forklifted him onto the truck that took him to the plane. Once back in NYC, there were apparently a couple of fights between Rock and my parents' pugs once--at least one resulting in a bloody tail. And I have seen one seemingly nasty one since we arrived. But the three pugs (Eddie and Champ are my parents' pugs) seem to be getting the hang of things now. And Rock seems to have forgiven us for putting him through it.

I am always really happy to arrive in New York and feel back in my element. But it is also always bit jarring for the first few days. There is constant stimulation and interaction with people here, including in my parents' house. There are many more people on the streets and stores, and everyone needs to interact with other people a little bit all the time. Much gets done within a short period of time with very little conversation, or conversations are quick and funny and productive. Sometimes infuriating, of course, but generally productive. In contrast, Seattle interactions are slow, pleasant, and often completely useless. Generally very polite and I enjoy them most of the time. But they tend to be more about passing time while something is getting done than actually getting something done. I end up feeling impatient and bitchy there, and perfectly normal here.

But when I really knew I was back home was at Shoprite, where I went to get fish food for my mom's office's fish tank. The bakery section has canolli shells they fill will fresh filling, in two sizes. 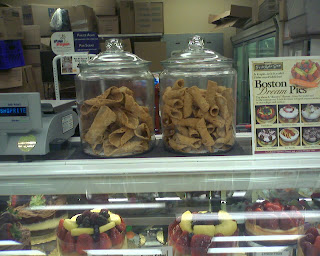 I'm sure they aren't the best, but I cannot tell you how exotic (and expensive) this would be in Seattle. I then went to Moretti's Bakery on Forest Ave to find anisette and sesame cookies. The girl behind the counter only had a giant cake box so she threw in a few apricot and raspberry cookies so it wouldn't look too empty. She didn't want my cookie box to look too empty! I tipped her, which was good, because I then forgot my wallet and had to send my father in for it 30 minutes later. After waiting in line at the post office for a while before noticing I didn't have it, of course. She had already called my office in Seattle and left a voicemail.

The icing, however, was getting home and reading the Staten Island Advance front page story subtitled "Dueling banners in Dongan Hills claim 'World's Best Pizza." There are many Worlds Best signs in the world. But turns out one of these two guys (Goodfella's) won the last World Pizza Championship in Las Vegas. The other was a runner up for the East Coast region or something.

In sum, it is nice to be back in foodland. There is of course good food in Seattle, and there is no way that my local Seattle supermarket would have run out of ground flax seed the way Shoprite did. But the goodness is just seeping out of every scruffy corner here, whereas Seattle feels bland in comparison. There is only so much Pacific Northwest style seafood that one person can eat. That said, I haven't worked out in four or five days (not counting many, many trips from the basement to the third floor of my parents' house carrying awkwardly shaped heavy objects) and will probably gain 50 pounds over the summer. I have not even hit my favorite bagel place yet, and those things are at least 400 calories a pop. Plain. I guess that would further complicate the wedding dress issues.

Whatever. I hear at least two pugs snoring right now, have a box full of aniette cookies to attack for breakfast, and am very happy to be back.