These past few days have been oddly productive on several fronts. I did my taxes. I used a lot of CSA veggies. But more importantly, I suddenly had a burst of enthusiasm about wedding planning. I am not 100% sure, but I think I might be circling in on what "owning it" might mean--aside from the undertones of consumption and debt.

Whereas a few weeks ago I was infuriated by anything having to do with weddings or wedding planning (including really pissed off at Jake for having proposed, to be honest), last night I managed to flip through almost the entire issue of Martha Stewart Weddings without getting angry. I did get annoyed by article about which cosmetic procedures you can squeeze in before your wedding at 12, 9, 6, 3 months, etc. (I am in the botox range; possibly microdermabrasion if I got on it right now). But I appreciated the pretty pictures of ridiculously expensive earrings and bracelets and very labor intensive cakes. This is a Major Milestone.
And today I talked to a coworker whose wedding is also in September and who is an admirably practical, crafty and hard wedding worker. She just finished making her own invitations, and is taking a break before starting in on thank you cards. She has done flower arrangements for other people's weddings, and knows how to decorate. She is doing all of the decorating herself. She gave me good tips: get color on the tables with linens so you don't have to bother with it elsewhere; there is such a thing as long-burning votive candles you can get cheap; and yeah, little lights and lanterns look good. It turns out she was thinking about some of the same stuff I was -- like the twiggy stuff in the photo above (I'm not wild about that one specifically, but you get the idea). She upped my website with nice earthy materials with one of her own that had similar stuff, and cheaper. Go Katie go. Jake's sister-in-law Amanda, here with the very cute Izzy 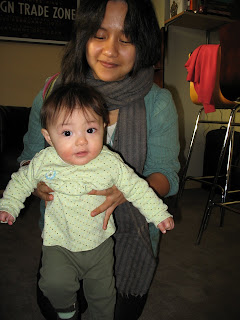 , has graciously offered to help with this stuff and is also very crafty and has a great sense of style. And she is conveniently located about 1500 miles closer to Dairymen's than I am. I hope she doesn't regret the offer.

The dress thing -- two fittings down this week -- is just so-so. I am more nervous about it now than when I started. It seemed like the alterations needed were minor, but now I am starting to think they might be a bit more major. Whatever. The thing basically fits, and I might have to chemically affix it to my body to keep it up. Whatever. Th eseamstress thinks only two more fittings--it seems her assistant errs on the side of caution fittings-wise.

In the meantime, a battle rages against the CSA veggies in my fridge. Last night as Jake and I were drifting off to sleep I woke both of us up when I heard myself announce "I can steam it." I was having a sort of half-dream about a head of cauliflower I have been moving around the fridge for a week. So I am apparently battling some low-level anxiety about the vegetables. So far this week I have made an rhubarb/blueberry/apple crisp, kale salad and my brother's caramelized carrots, and I have a soup on the stove with a mound of the cauliflower waiting to go in it.

The carrots are easy and have been a staple at family dinners forever, but I can never do them like my brother can. Now I think they are a staple at his firehouse. Chop up the carrots, cook them in a heavy skillet in enough olive oil to coat them--stirring occasionally until they are soft and browned or even look a bit burnt (we call them Arnie's Burnt Carrots). If your carrots are kind of on the old side, as if they have been sitting around since the cute hippie CSA delivery guy dropped them off a week or so ago, you can add some honey or brown sugar or season them however you like. Some lemon is nice. They are nice on their own, but I tossed them in a green salad.

The crisp was marginally more involved, if only because there is more chopping, some melting, and multiple bowls.

I tossed together:
Two apples, peeled and sliced
Two cups rhubarb, roughly chopped
One cup frozen strawberries
Two tablespoons orange juice
Juice from 1/2 lemon
About 1/2 cup raisins
About 1/2 cup sugar or more to taste (I don't like it that sweet)
Cinnamon to taste (I like a lot)

The fruit goes into a shallow baking dish, dotted with some butter. And the topping goes on top. Bake in a pre-heated 375 degree oven for about 30 minutes and then check it. The fruit should be bubbling and the topping starting to brown.

I forgot to melt the butter until I had already mushed half of it into the dry topping ingredients, so I melted what I had left and mixed it up, threw it on top and it was fine. It is really hard to go wrong with a crisp.

The soup is not really worth talking about. I had an onion, potatoes, a red pepper and cauliflower in the fridge, and about 2 cups of split peas. Now that's what is in the pot -- along with some cumin and allspice and vegetable stock. And soon to be joined by a couple of parmesan rinds. Actually, I have a can of white beans I am debating tossing in. Seems like a lot of beans. But anything immersion blended is good in my book, and gets me one step closer to a clean fridge and cabinets for Jake's cousin Court (our subletter this summer).

What a long post! Thanks for hanging in there with it. XO
Posted by Martha at 7:12 PM