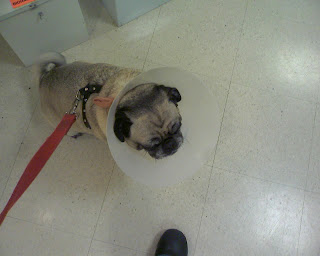 Poor Rocky is having pretty nasty eye problems this week and weekend -- maybe an ulcer in his right eye that isn't clearing up yet. I took him to the Vet on Wed., who gave me eye drops and told me to take him in ASAP if it got worse. It did, so I took him to the vet ER last night. This picture is us leaving. They gave him a second set of eye drops, saying the first set could be making it worse (great.) but this morning he looks pretty miserable. He hates the lampshade thing, and is completely confused by it. He basically just sits and whines, or bumps into things with it if he tries to move around. But if I take it off he starts pawing at the bum eye. Walking him was pretty comical, if also sad -- he can't sniff stuff to then pee on it, so he sort of bumps it with the lampshade and then looks at me quizzically. I finally took it off so he could take care of business.

So about $400 down so far, and no closer to his eye looking better or knowing what's up with it. And no luck getting work done this weekend. I'm trying distract myself from the pug for a couple of hours until I can decide if it is getting worse and if I should drag him to the vet again. I'm not sure what else they can do until it gets so bad that they'd have to do something involving incisions (poor pug!). Jake's cousin is coming over for a bit, and I have some articles to read to revise one of my dissertation committee member's papers. And I have something I'm supposed to bake for the Daring Bakers monthly challenge thing ... so plenty to do between bouts of staring into Rocky's yucky right eye.
Posted by Martha at 1:53 PM